In Minecraft, seeds are codes that players can enter to generate a world that meets their specific needs. Usually when players think of seeds, they think of actual seeds that are planted, however this is not the case in Minecraft.

Every Minecraft world has its own seed even if players did not type one in themselves. Seeds are how worlds are generated. Even if players just hit ‘Create world” without changing anything, it will still have a seed code.

Seeds are very unique, and no two seeds are the same. Players can either get seeds by making up their own, or they can find seeds off the internet. Players can just come up with a random combination of letters or numbers if they wish to create a randomized seed.

The only flaw with doing this is that there is no guarantee players will get a good seed. Seeds generate both the overworld and the Nether. Players will want to get a good seed that has easily obtainable good loot.

In this article, players will learn the 5 best seeds for spawning diamonds on Minecraft pocket edition. 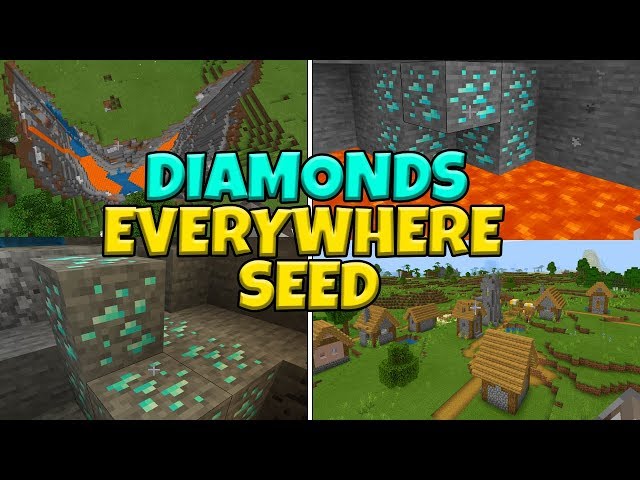 In this seed, players spawn near a ravine where they can find a lot of the goodies. Players will notice that there is water at the bottom of the ravine that they can use as a landing pad.

Players should first get some wood to craft sticks before just diving into the ravine. Players cannot craft pickaxes without wood and it is hard to get out of a ravine once inside of it because of how deep it is.

At the bottom of this ravine players will find a lot of diamonds that they can use to craft a lot of resourceful items.

In this seed players will spawn near a cliff with lava spewing out of it. Near this eye catching view, players will find an abandoned mineshaft that is attached to a cave.

Players will find diamonds both inside the mineshaft and inside of the cave. The Mineshaft will have at least three diamonds inside and lots of other materials that can be helpful to the player throughout the game.

When entering this seed in Minecraft, players will spawn near a village. This village is very unique because players will notice that if they dig straight down, or around the well in the village they will drop into a mineshaft.

Players will run into a chest inside the shaft near the dropping point that includes a lot of diamonds and other materials that they can use to craft armor and weapons.

This Minecraft seed is really good for finding diamonds in Minecraft hence they will spawn right underground of the spawn location. Players should remember the locations of their spawn so they can come back here later.

Players can go to a nearby village and find more resources to gather up and make armor before going out to loot for the diamonds. The diamonds are in a cave, and are in the very bottom, so the player should gear up first.

Upon the entrance of this Minecraft world, players will find themselves spawning near a ravine. This ravine is also near where the stronghold is located. Players will need to visit the stronghold later in order to beat the game.

At the bottom of this ravine, players will find tons of diamonds that they can mine up once they have all of the needed materials to do so.