Minecraft star Thomas “TommyInnit” Simons recently clamored for TikTok star Charli D’Amelio’s attention on Twitter, much to the chagrin of his fans.

During his recent stream, the internet sensation was shocked to find out that he and Charli are both 17. 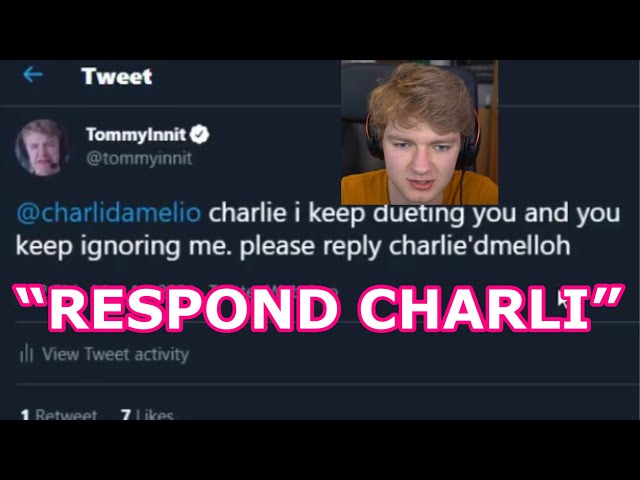 In light of this discovery, he went on a hilarious rant, as he called her out for repeatedly ignoring his attempts to interact with her:

“How come then, Ms D’Amelio, when I repeatedly drew at you on TikTok. Look at me, I’m signal boosting you, lady! Why does she ignore me? Why does she have an apostrophe in her name? Delete that, Charli. It’s uncomfortable for me! As a professional TikTok sensation myself, I know that it can be excused for the amount of likes she gets. We can compromise.”

@charlidamelio charlie i keep dueting you and you keep ignoring me. please reply charlie’dmelloh

What made his plight all the more hilarious was the fact that just moments before he directly tweeted at her, Charli D’Amelio appeared to be tweeting.

This prompted yet another reply from TommyInnit who went to her main account and quizzically enquired:

In light of his repeated attempts to get Charli D’Amelio’s attention, Twitter was soon abuzz with a slew of humorous reactions.

Also Read: TommyInnit nearly passes out during Minecraft stream, as his blood pressure drops out of excitement

Apart from deliberately spelling her name wrong, TommyInnit’s mention of Charli D’Amelio incited a flurry of activity in his chat, with fans urging him not to embarrass himself.

However, their pleas fell on deaf ears as an adamant TommyInnit proceeded to tweet not once but twice at the TikTok star.

In light of his not-so-subtle attempts at getting her attention, several fans responded by hilariously labeling his efforts as embarrassing and cringe:

that’d be his flex for the next 3 months. he wouldn’t live it down lmao

Humorous banter aside, it now remains to be seen if Charli D’Amelio decides to answer TommyInnit’s hilarious pleas for recognition or not.