The recently-concluded UFC 262 event had some big names in attendance, including WWE’s Goldberg. The former Universal Champion was spotted at the packed Toyota Center, enjoying a stacked fight card.

Goldberg even managed to have a memorable moment at the event as he playfully put UFC Hall of Famer Matt Serra in a headlock. The former WWE Universal Champion also affectionately kissed Serra’s head after the headlock in the short clip that you can view below. 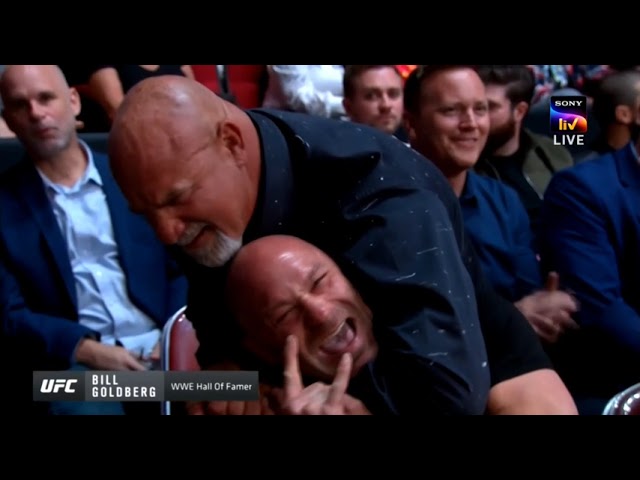 The WWE Hall of Famer hyped up the returning crowds in a separate video posted by UFC Europe’s Twitter handle.

UFC 262 was headlined by a lightweight title clash between Charles Oliveira and Michael Chandler. The UFC veteran defeated the former Bellator Champion to become the king of the 155lbs division of the UFC.

The UFC’s latest pay-per-view featured five main card bouts, two of which ended in knockouts, including the lightweight championship main event. You can check out all the results and highlights of UFC 262 here.

Goldberg has not appeared on WWE TV since losing a WWE Championship match against Drew McIntyre at this year’s Royal Rumble.

Goldberg’s WWE contract runs through 2023, and the WCW legend is scheduled to have two matches per year with this deal. WWE could get Goldberg back for another contest this year, but who will he face upon returning?

During an appearance on The Bump in April, Goldberg mentioned his desire to face Cesaro in the WWE:

“I’d love to get in the ring with Cesaro. He’s one of the most talented guys to have ever put on a pair of boots. There’s no question about it. He’s very underappreciated, but now he’s getting some attention that’s well-deserved,” noted Goldberg. H/t Zain Jafri of Sportskeeda Wrestling

Goldberg would also like to mix things up with Big E, and a match between the two powerhouses does sound great on paper.

Goldberg is a proven draw for Vince McMahon’s company, and fans should expect to see the 54-year-old veteran back in action before the year ends. But who’s next for Goldberg? Let us know your picks in the comments section.