Inzamam-ul-Haq has opined that cricket boards should not promote T20 cricket by ignoring Tests. He stated that the real beauty of the game lies in Test cricket, so the administrators should treat both formats equally.

T20 cricket has become one of the most popular formats of the game over the last decade. A significant number of fans have preferred T20s over Tests because of the shorter duration of the game.

It has also been noted that matches in the T20 format are a bit more unpredictable than Tests. Due to the fan following, T20 generates more revenue than Tests.

So, of late, cricket tours have comprised more T20 games than Tests, which former Pakistan captain Inzamam-ul-Haq believes is wrong. Speaking on his YouTube channel, he said:

“If T20 cricket is more entertaining and gets you more money, sure, do it. But not at the cost of Test cricket. It shouldn’t be the case that you are reducing a three-match series to two Tests and increasing a three-match T20I series to five. The board shouldn’t send out a message that players should play on T20 cricket and that T20 is of prime importance to us.”

The International Cricket Council (ICC) has tried its best to keep the Test format alive by introducing the World Test Championship (WTC).

However, teams are focusing on the T20 format at the moment, keeping in mind the ICC T20 World Cup, which is set to take place later this year.

Quite a few players have retired from Tests early to focus on ODI and T20I cricket. Hinting towards that trend, Inzamam-ul-Haq added:

“Don’t end Test cricket and replace it with T20 cricket. If this happens, it will be unfair to both the sport and the players because if the boards devote more focus to T20 cricket over Tests, then the players will also follow the same path. Moreover, even the youngsters and the next crop of cricketers will also start focusing more on T20 cricket from the start.” 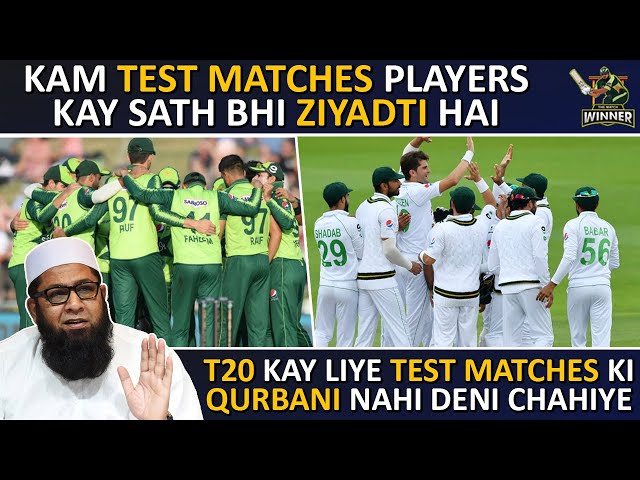 It will be interesting to see if cricket boards take note of Inzamam’s suggestions and conduct an equal number of Tests and T20s in the future.