The Nether in Minecraft used to be quite predictable and easy to traverse. However, the Nether Update completely changed the area by adding new biomes and treacherous terrain generation.

These new additions have made it a lot harder to travel in the Nether. Luckily, players have a few different techniques to travel to the Nether efficiently.

Travelling to the Nether at different points in Minecraft

Early in the game, players won’t have access to the most efficient ways to travel. However, they still have a few options to utilize.

As seen in the image above, a Nether pathway can be a safe and easy method to travel from point A to point B in the Nether.

When guarded by two-block high fences, no hostile mobs will be able to break into the pathway. Players are highly recommended to build a ceiling on their pathway to prevent Ghast fireballs.

Players can also dig into the highest layer of the Nether, where travel will most likely be safe.

Railways will provide even faster and safer travel in the Nether. However, players must have a good supply of Iron and Redstone to create one.

Players who have access to both a Warped Fungus on a Stick and a Saddle have the ability to ride a Strider, which provides safe travel over a large body of Lava.

Players who travel via Strider are still recommended to carry Potions of Fire Resistance just in case of disaster. 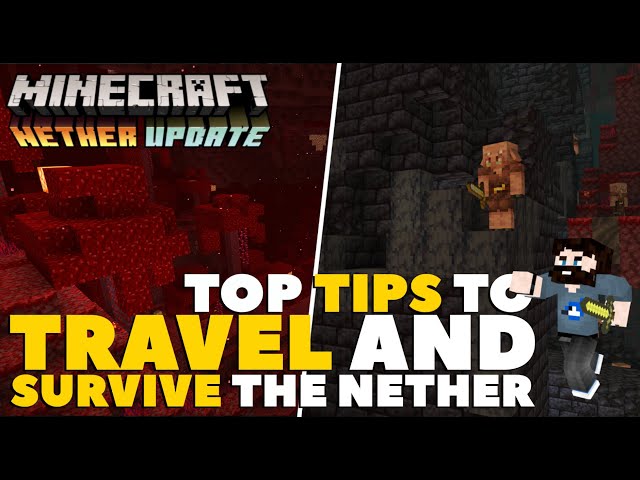 The video above will teach players everything they need to know about the new Nether.

Also read: How to prevent hostile mobs from spawning in Minecraft

One great way to travel in the Nether is a Packed or Blue Ice highway.

When the player rides a boat on Packed or Blue Ice, they will be able to move at an astronomic pace, flying past any potential threat. Still, players must ensure that their highway is completely secure from being infiltrated by hostile mobs.

The best way to travel in the Nether is, by far, the Elytra.

When paired with fireworks, the Elytra will allow Minecraft players to efficiently and safely fly to their desired location. Of course, players must defeat the Ender Dragon and find an End Ship to acquire this late-game item.

Also read: 5 best potions to use during the Ender Dragon fight in Minecraft