Day 38 of the Skyesports Valorant League 2021 featured a nail-biting series between Punjab Pinnacles and Mumbai Aces as Punjab clinched victory with a 2-1 scoreline. 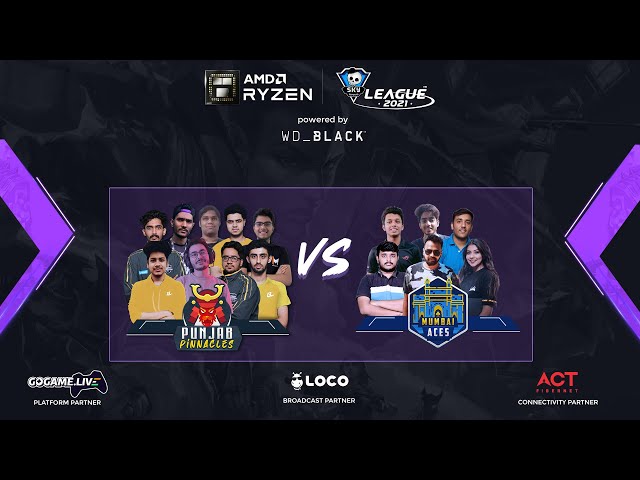 Previously both teams went up against each other on day 13 of the Skyesports Valorant League 2021. The last series ended in Mumbai’s favor as they defeated Punjab Pinnacles in a 2-1 series. Heading into this series, Punjab Pinnacles looked to exact their revenge.

As the group stage nears its end, every single victory is vital for the Punjab Pinnacles as they are still stuck in the bottom two. A sigh of relief came as they defeated Mumbai in this series, securing the two necessary points.

The three Valorant maps decided by the two teams for their series through the map veto process were:

The first match of the series was played in the Valorant map Icebox. Punjab Pinnacles started in the attacker’s side and quickly drew first blood, winning the first pistol. Building on that momentum, Punjab secured four consecutive rounds and made the scoreline 0-4.

The first half went on as Punjab dominated the side of Mumbai Aces, dropping only two rounds to the latter. The first half ended with a staggering 2-10 scoreline.

Going into the second half, Punjab Pinnacles again secured a second pistol round to score 2-11. After that, Mumbai answered back with another round win. But, to their absolute disdain, Punjab Pinnacles powered their way through and won two more rounds to seal their first Valorant match in a 3-11 scoreline.

After such a dominating display, Punjab started the second match of the series in the Valorant map Bind as the attackers. The first five rounds went towards the side of Mumbai until finally, Punjab bounced back with a win. Despite Punjab’s best efforts in the first half, Mumbai Aces ended the half with a 7-5 lead.

Going into the second half, Punjab quickly won two consecutive rounds and evened out the scoreline to 7-7. In the 15th round, riding on the backs of a Hydraflick’s clutch play, Punjab was finally in the lead.

Mumbai, however, closed the gap quickly and went ahead to lead with a 10-8 scoreline. Punjab again caught up and evened the score. After trading rounds with each other, Mumbai was up for match point when Punjab won the 24th round to take the game to overtime.

Punjab Pinnacles was ready to take away the second victory in overtime when Mumbai finally pulled through and won two consecutive rounds. With that, Mumbai tied the series for now with a 14-12 scoreline in match 2.

Valorant Map Split was the decider. Both teams went in with the determination to win the third game. Trading rounds ended the first half in 6-6.

Going into the second half, the two teams looked even as they both won two rounds each to get 8-8. The scenario looked the same as the previous one as Mumbai was once again up for match point with a 12-10 scoreline. But again, Punjab came back and secured overtime.

However, unlike the last Valorant game, Punjab Pinnacles secured the two rounds and won the third match and the series 2-1 against Mumbai Aces.

Punjab secured two points with a 2-1 victory as they stand a chance of getting into the playoffs. Meanwhile, Mumbai is inching towards Kolkata Tridents with only a 0.5 point difference.