Fans of Thomas “TommyInnit” Simons were recently treated to a wholesome livestream moment when the Minecraft streamer reacted to his appearance on a Swedish news channel.

During his latest livestream, the 17-year-old star came across a YouTube channel that captured his appearance on a Swedish news channel called Lilla Aktuellt.

TommyInnit was not the only one to be featured on the children’s news channel, as the likes of Ph1LzA, Tyler “Ninja” Blevins and Ludwig Ahgren also made appearances.

TommyInnit had one of the most wholesome reactions to his own appearance on the channel, and this invited a slew of responses from the online community.

TommyInnit wins over fans with reaction to his appearance on a Swedish children’s news channel ft. Ph1LzA, Ninja adn Ludwig 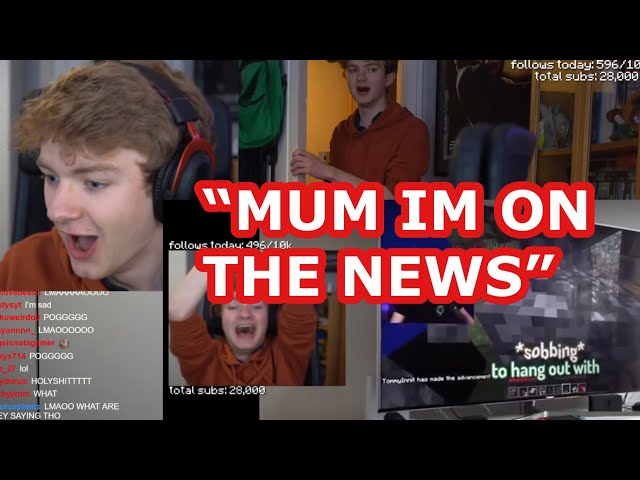 Before he spotted himself on TV, TommyInnit was visibly excited at the appearances of Ph1LzA, Ninja and Ludwig.

“No way, is this real, is this real? Ninja! Ninja! Oh my God, my friend Ninja! Yeah, Ph1LzA Minecraft! Am I there?”

However, when his turn finally came, he let out a cry of joy and immediately ran to inform his mother in the most wholesome manner:

“What the F**k! Mum!! I made the Swedish news! I’m on the Swedish news for gaming! I don’t know, it’s in Swedish! To whoever who just sent that in the chat, well, well ,well it’s me, actor, reporter by your side! Oh My God, everything I’ve said about the Swedish I take back alright? “

In light of TommyInnit’s wholesome reaction and his hilarious conversation with “MotherInnit,” social media was soon abuzz with a barrage of reactions:

“it’s me international superstar tom simons aka tommyinnit” he’s so excited about being on the news im so happy for him pic.twitter.com/nOFNpD6cBc

My boy Tommyinnit was on the SWEDISH NEWS!!!!!!! @tommyinnit POPPING OFFFF LEEEESSSSS GOOOOOO

MUM IVE MADE IT ON THE SWEDISH NEWS-tommyinnit 2021

TommyInnit’s popularity has grown from strength to strength over the last couple of months, as he continues to make waves as a Minecraft creator alongside fellow Dream SMP members GeorgeNotFound, Ranboo, Quackity and more.

From leaving fans in splits with his IRL streams featuring Tubbo and Wilbur Soot to winning over the internet with his trademark quips on Twitter, there is never a dull moment when TommyInnit is around.

His recent appearance on the popular Swedish news channel serves as a testament to Twitch’s global popularity, which continues to reach astronomical heights with each passing day.