Khabib Nurmagomedov is one of the most prolific figures in modern mixed martial arts. ‘The Eagle’ retired from the sport after his win over Justin Gaethje at UFC 254 with an incredible record of 29-0. Khabib Nurmagomedov is not only known for his brilliance inside the octagon but his fierce loyalty to friends and family outside it.

‘The Eagle’ is usually seen with his cousins and training partners everywhere he goes. One of these is his cousin Abubakar Nurmagomedov. Oddly enough, Abubakar isn’t always called by his name, often referred to as ‘Manap’. In an interview with Mike Swick before UFC 254, Khabib Nurmagomedov explained why his cousin has this unique nickname.

“It was his first name when he [Abubakar] was born. Then, afterwards he changed his name. Sometimes in Dagestan, when you’re a kid, if you’re sick, they [family] sometimes change [your] name, you know? I think something like this. I remember when he was young he was Manap, like Abdulmanap, but after he become little bit big, his parents changed his name. Somebody call him Manap, somebody call him Abubakar, you know? Passport he have Abubakar.”

Evidently, it’s not uncommon in Dagestan for children’s names to be changed as they grow up. Abubakar was born Abdulmanap Nurmagomedov, which also happens to be Khabib’s late father’s name. But it would appear that when Abubakar reached a certain age, his parents changed his first name to what it is today.

‘The Eagle’ says that this may have happened owing to a sickness, which is common in Dagestan, but he wasn’t too sure.

You can watch ‘The Eagle’ answer Mike Swick’s unconventional question below: 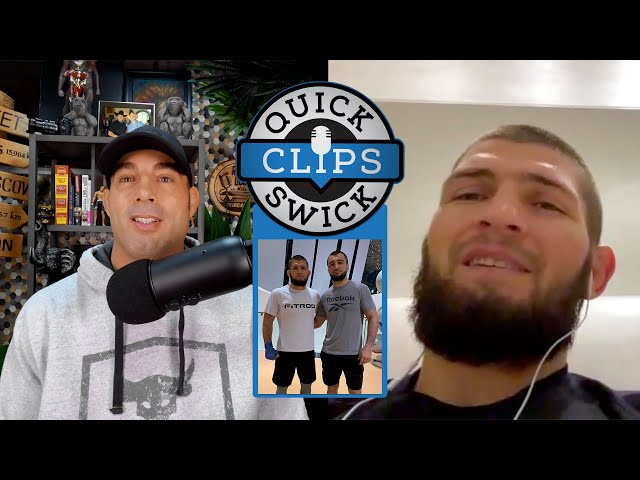 ‘Manap’ competes in UFC’s welterweight division. His last octagon outing was at UFC 260, where he claimed a unanimous decision victory over Jared Gooden on March 27, 2021. Khabib Nurmagomedov was seen in his cousin’s corner during the fight.

Safe to say, ‘The Eagle’ will try to accompany Abubakar for every fight of his career.

You can catch the full story here.